Sue Bryant sails on Celebrity’s new ship and asks whether it can possibly live up to the hype. The answer is a resounding yes

Has a ship ever been so hyped? Four years in design and construction, a string of technological firsts, a famous designer, new dining and entertainment concepts – could Celebrity Edge live up to expectations?

Happily, the answer is a resounding yes. I joined the 2,918-passenger ship for its first cruise carrying ‘real’ passengers, sailing out of Celebrity’s swish terminal at Fort Lauderdale. I stepped on board and was wowed by the striking, three-deck Grand Plaza, at its heart a vast LED chandelier, shimmering in changing colours.

Edge is a big ship, at 129,500 GT, but it exudes serenity. Everything feels luxurious, curvy, touchable. The colour scheme bears many hallmarks of Kelly Hoppen, the interior designer responsible for the staterooms, suites and spa; soft greys, cream, taupe and splashes of burnt orange, rich mauve and aquamarine. Everything whispers ‘quality’, something of which CEO and president Lisa Lutoff-Perlo is proud. “Every time I look up, I realise the attention to detail and design didn’t stop at the ceiling, which on many ships it does,” she says. “Even the staircases are works of art.”

With Edge, Celebrity is going all out for high-spending customers. There are 176 suites, representing 12 per cent of the accommodation – double the amount on Celebrity’s other ships. No expense has been spared. Six two-deck Edge Villas have an outdoor plunge pool and sell for upwards of an eye-watering £24,300 for a week. Two stunning Iconic Suites sit on top of the bridge wings with masses of private deck space, day beds, an outdoor hot tub and uninterrupted views on three sides.

All the suites share The Retreat, a beautifully designed sanctuary with concierges, a lounge, the Luminae restaurant and an exclusive outdoor deck. Oversized rattan loungers with grey and white striped cushions give the impression of a cool beach club, made more fun by swinging basket chairs suspended over the pool.

The big talking point beyond the suites is the 918 Infinite Veranda staterooms. There’s a similar concept on some riverboats, where half the wall of glass slides down at the push of a button to create a balcony effect, but achieving this on a big ocean-going ship is no mean feat. The whole supporting spine of the ship had to be moved inwards, involving extensive 3D modelling. Because the balcony is an integral part of the overall space, these cabins are 27 per cent bigger than regular balcony accommodation – and you really feel it. Even the bathrooms are spacious, with generous walk-in showers. Equally pleasing is the fact that the lights and the shutter can be controlled by the Celebrity app on your phone, which also opens the cabin door. 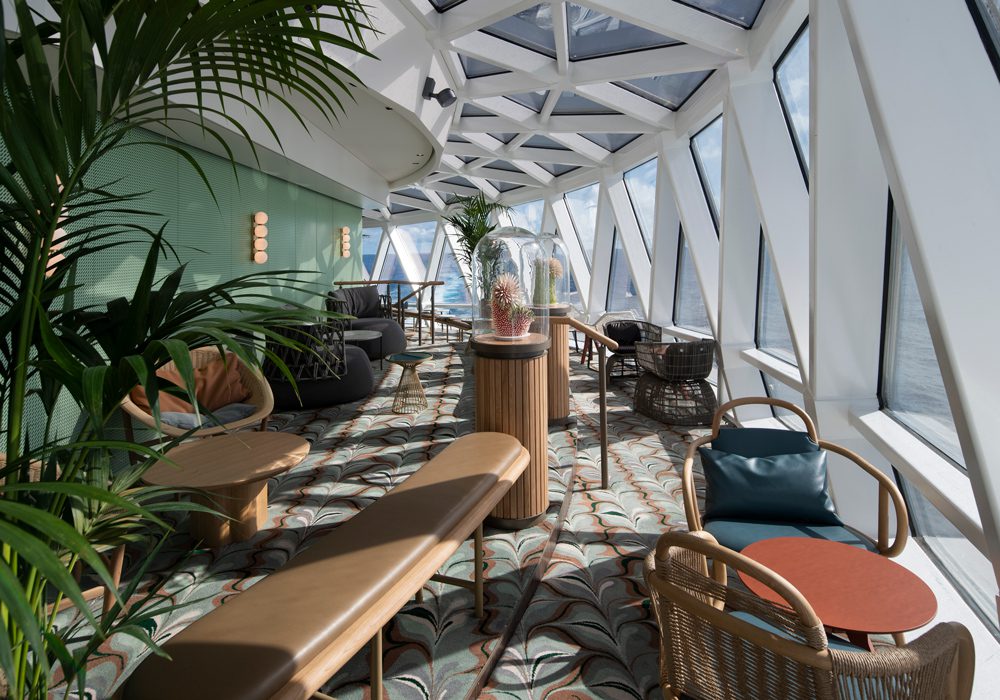 Around the ship, the headline-grabbers come thick and fast. You could identify Edge from a great distance thanks to a bright orange structure attached to the starboard side (although Lutoff-Perlo insists
the colour is tangerine, not orange). A 90-ton, tennis court-sized platform, the Magic Carpet moves up and down with different functions depending on where it sits. On deck two, it creates a spacious tender embarkation area, so no more queuing down the stairs. On deck five, it’s an al fresco dining extension of the Raw on 5 seafood restaurant. On deck 14, it sits alongside the pool deck, while twice a week, it becomes a restaurant for Dinner on the Edge, high up on deck 16. I had wondered whether the Magic Carpet would turn out to be just a gimmick, but it’s fabulous. The sea-facing side is pure glass, so you really have a sense of nothing between you and the ocean, and the deck furniture is, of course, infinitely stylish, with big, squashy sofas in grey, white and orange. On a sunny sea day, there would be no better place to lounge.

When Celebrity launched its Solstice-class ships 10 years ago, the big talking point was the half acre of living lawn, and very lovely it was, too. The Lawn Club is gone on Edge, though, replaced with the Rooftop Garden, a bar and grill, dancefloor, big screen and general outdoor living room, a mixture of quiet little enclaves and long, wavy wooden benches that give the whole place the feel of a posh park. Sculptured wooden ‘trees’ are dotted around to create shade and serve as wind breaks, and the whole area is lush with big potted shrubs. When I visited, a guitarist was perched on a platform under one of the trees, playing gentle Spanish classical melodies; a pleasing change from
the thumping music by the pool.

This theme of nature is even more apparent in Eden, a dreamy lounge spanning three decks, supported by skinny, tree-like columns, filled with tropical plants and surrounded by the tallest wall of glass at sea, so you almost feel part of the ocean. A walkway spirals around the whole complex space, giving it an almost organic feel. “The shipyard said this was the most complicated space they had ever built,” says Lutoff-Perlo.

Eden is inhabited by a team of ‘Edenists’, ethereal creatures who waft around all day, striking poses, dancing and occasionally performing aerial stunts from a swing suspended high above the diners below. After dark, things hot up with lighting effects and writhing as the Edenists tell the story of the Garden of Eden, often selecting members of the audience to participate, something I’m not sure reserved British cruisers will appreciate. I had dinner there and was relieved not to be dragged up to ‘perform’, leaving me free to tuck into my fish with white asparagus, followed by a white chocolate dome, melted with hot chocolate sauce.

Dining on Edge is quite a departure from Celebrity’s other ships. The main dining room has been replaced by four separate restaurants, with some common menu items and some unique to each restaurant. Cyprus is Mediterranean; Tuscan is a nod to the Tuscan Grille on Celebrity’s other ships; Cosmopolitan is modern American and Normandie, French. All the restaurants feel more chic boutique hotel than cruise ship. Passengers can sign up for fixed dining, which means you always eat in the same restaurant, or Select Dining Plus, which is open seating in any of the four, which I’d recommend.

In addition, Celebrity regulars will recognise Blu, the healthy restaurant reserved for Aquaclass passengers; Café Al Bacio, for snacks and gelato; and the light, airy main buffet, the Oceanview Café. Everything else, though, is new. There’s steak at The Fine Cut Steakhouse ($55); piles of seafood at Raw on 5 (a la carte pricing); BBQ-style at the Rooftop Garden Grill ($45); and French classics in the Grand Bistro ($25).

If you suggest clients splash out on one speciality restaurant, though, make it Le Petit Chef, which costs $55. A section of Le Grand Bistro has special tables, where 3D cartoon figures are projected onto each plate. Four virtual mini-chefs bustle around, preparing food, performing stunts, squabbling and creating each of four dishes on your plate. Once the dish is ready, waiters appear bearing an exact, real-life version for you to eat. It’s completely enchanting.

My verdict? I believe that the combination of cool design, cutting-edge technology, entertainment and dining makes this ship special – and perfectly positioned to attract younger cruisers. Other ships in Celebrity’s fleet may be more suitable for traditional, more conservative clients, but if you could lure a reluctant new-to-cruise customer onto Edge, they’d be blown away.

Read the December 2018 issue of Cruise Adviser, featuring the ship everyone is talking about on the cover: Celebrity Edge. You can read Sue Bryant’s excellent feature here. Elsewhere, we take in the Japanese capital, Tokyo, in our Ports of Call feature, while Sara Macefield joins Cruise & Maritime Voyages on a cricket-themed cruise to Amsterdam. What’s more, we’ve got 50 places to give away on MSC Bellissima – click here to enter.

Work in travel and want to receive a copy? Then subscribe here.

How cruise is getting greener

Six wows on Wonder of the Seas